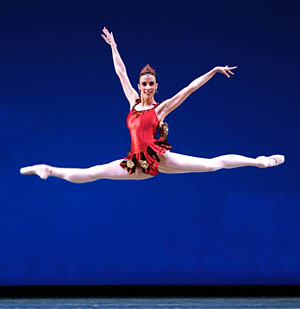 Rubies is the central ballet of Balanchine’s full-length Jewels, which premiered in its entirety in 2006 at Pacific Northwest Ballet. Choreographed for Patricia McBride and Edward Villella, two of the most vivacious dancers in American dance history, plus a supporting female lead and a corps of twelve, Rubies effuses glam wit and jazzy chic. The saucy leading couple plays and competes as equals, and a second, siren-like ballerina takes on the men of the corps de ballet, requiring all four of them to partner her at once. Former PNB Director of Education Jeanie Thomas wrote, “‘Capriciousness’ [referring to the title of Stravinsky’s score] might also be said to characterize Balanchine’s choreography, which is half elegant, half street-smart. With its jutting hips, flexed feet, show biz kicks and witty counter-rhythms,Rubies is a many-faceted example of the exuberantly distorted classicism that Balanchine invented to render Stravinsky’s musical idiom three-dimensionally.”