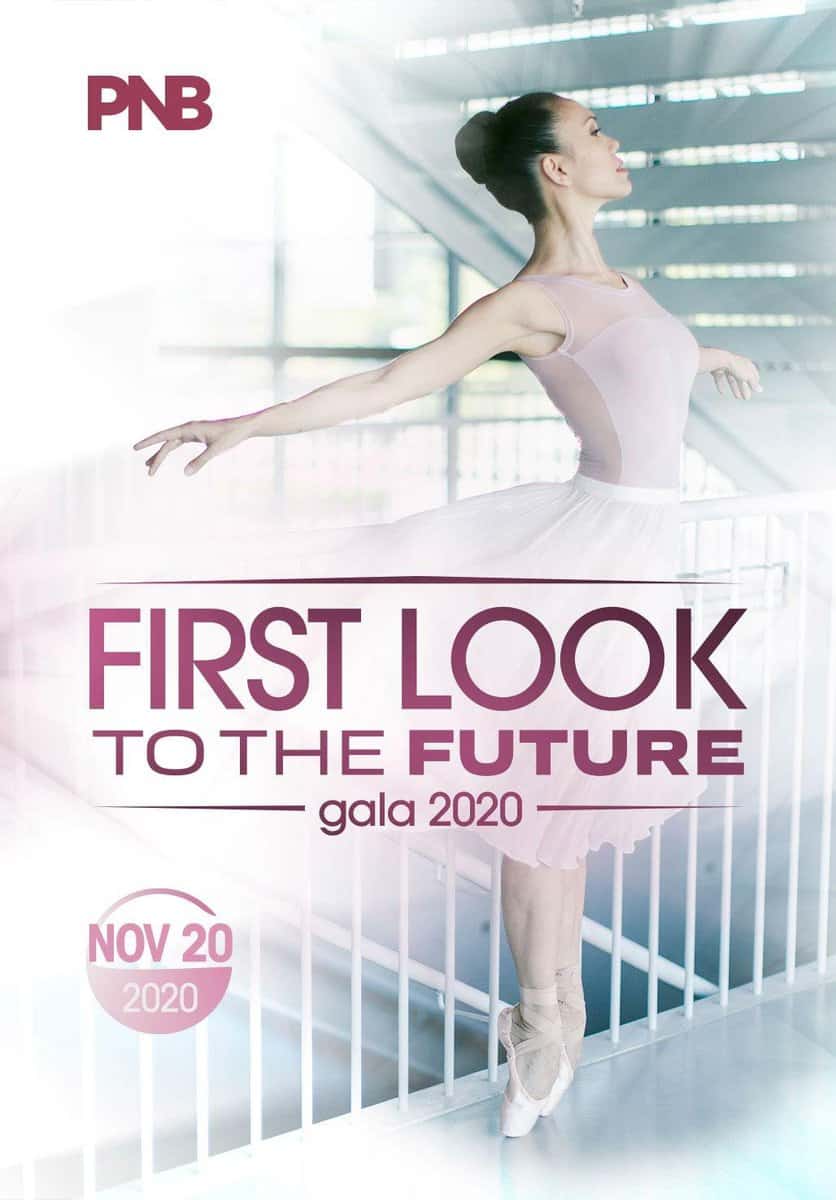 Join us! PNB’s annual First Look Gala is going virtual and free for all to attend! Celebrate with PNB as we look to the future with the PNB premiere of Alejandro Cerrudo’s PACOPEPEPLUTO and raise a glass, raise funds, and raise our collective voices in support of PNB’s future.

The First Look Gala performance video will be available for five days.

Proceeds from the gala will support PNB’s Future Fund, which will help sustain the organization until we’re able to safely perform again. Give your raise the paddle gift now so on the night of the event you can sit back, relax, and know that you’ve done your part to support PNB.

The Gala is free to attend, but pre-registration is required. After you hit submit, you will be redirected to the Gala Livestream page. Please save or bookmark this link!

By signing up with the form above, you agree to receive emails from PNB. You may unsubscribe at any time.

Three solos for male dancers set to songs popularized in the ’50s and ’60s by “the king of cool,” Dean Martin, PACOPEPEPLUTO shows PNB resident choreographer Alejandro Cerrudo’s skill at balancing aesthetic austerity and sharp wit. This PNB premiere is the fifth work by Cerrudo to enter the Company’s repertory.

Choreographer Jessica Lang writes: “Ghost Variations was composed by Robert Schumann in 1854, the last work he ever wrote, just prior to being committed to an asylum for insanity. Schumann believed he was being haunted by composers from the grave who were dictating the theme to him—forgetting he had already written it himself. The work was dedicated to his wife Clara, who guarded this final score and would not allow the theme and five variations to be published until finally they appeared in 1939.

“This ballet to the same title weaves Robert Schumann’s ‘ghost’ theme and two of the variations with Clara Schumann’s own piano compositions. The final movement of the ballet is a lieder entitled Mondnacht, written by Robert and arranged for solo piano by Clara, marking their indelible collaboration of life, love, and music.”

Jessica Lang has set this final movement as a duet, performed here by Dylan Wald and Elle Macy, joined by Christina Siemens at the piano. Ghost Variations is Lang’s second creation for PNB.

In 1984, Arms helped signal Susan Marshall as a major artist and innovator in the history of contemporary dance when it premiered at PS 122 in New York City. The Village Voice called it “a small masterpiece.” A five-minute duet, Arms was a game-changer in the New York “downtown dance” scene and an important early example of Marshall’s expansion of the formal structures of post-modern dance to include everyday gestures and imbue them with emotional resonance. A PNB premiere, Arms is the second work by Susan Marshall to enter the PNB repertory.

The iconic role of the young god Apollo, choreographed by 24-year-old George Balanchine in 1928, has been associated with many dancers over nearly a century of performances. These include Peter Boal, a celebrated Apollo during his years at New York City Ballet, who has staged these excerpts for a newly promoted principal dancer to be joined by principal dancer Lesley Rausch as Terspichore, muse of dance.

Choreographer Ulysses Dove’s Red Angels premiered at New York City Ballet in 1994, with Peter Boal in one of four leading roles. Peter brought Red Angels to PNB during his first season as artistic director of the company. Tonight, we will celebrate a newly promoted soloist in an excerpt from the ballet’s finale, joined by concertmaster Michael Jinsoo Lim on electric violin.

PNB’s 1981 production of Kent Stowell’s Swan Lake was a milestone for our young Company, and its new design and revival in 2003 to celebrate the opening of McCaw Hall was another momentous occasion that featured this beloved ballet. The dual role of Odette and Odile, the white and black swans, has afforded countless generations of dancers the opportunity to demonstrate the highest levels of technical and expressive prowess. This evening, a newly promoted principal dancer, coached by Founding Artistic Directors Kent Stowell and Francia Russell, will make her mark in the role of Odile in tonight’s showing of the variation from Swan Lake’s legendary Black Swan pas de deux.