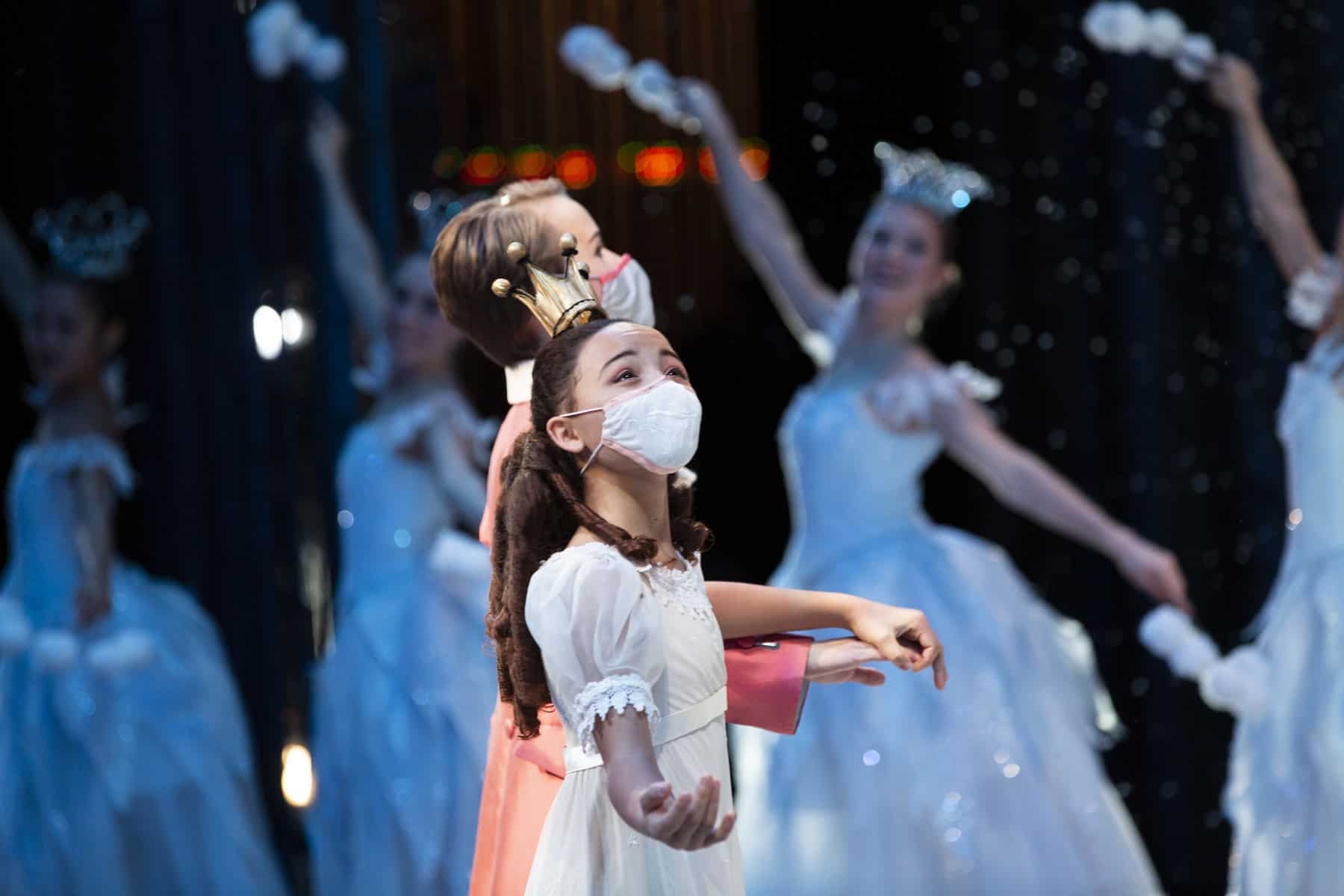 “This cannon fires cheese,” Mr. Gio explained in a recent battle scene rehearsal for George Balanchine’s The Nutcracker®, prompting all the nine and ten-year-old Soldiers to giggle uncontrollably.

“What kind of cheese?” asked Soldier Number Seven, clearly thrilled with Mr. Gio’s proclamation. Under his breath Mr. Gio repeated the question laughing to himself, rolling his eyes. “Cheddar! Now let me see your lines!”

And so goes the rehearsal process with our trio of Rehearsal Directors, teaching and coaching eighty-five talented students from our school. Another forty from our advanced divisions alternate with Company dancers in corps de ballet roles and two Level VIII women crawl under the rolling bed.

You may be surprised to know that even in a post-pandemic year, Company members can pull The Nutcracker together in about two weeks. We spend more time with the students. Mr. Gio is Giovanni Villalobos and he rehearses Soldiers, Sentries, Trumpeters, Bunnies, Mice, Hot Chocolate, and Polichinelles. Anne Dabrowski rehearses students in Snow, Flowers, Marzipan, Maids, Candy Canes, Claras, and Party Scene Guests. Otto Neubert teaches Fritz, Party Guests, and Angels, and performs Herr Drosselmeier. All of this is in addition to their work with Company dancers. I work with Princes, Claras, and Bed Rollers. Yes, back in the day I was a Bed Roller and, like riding a bike, you never forget.

Ultimately, we put on an incredible show for you, but I wish you could witness the care and patience exhibited by our Artistic Staff behind the scenes. Their commitment runs deep. They stand in the wings ready to calm nerves, count music, pass props, and cheer our student performers on when they make an entrance or an exit, and especially when they take a well-deserved bow.

This year we also welcomed Judith Fugate back to Seattle. Judy served as principal stager when PNB debuted George Balanchine’s The Nutcracker® in 2015. Judy literally grew up in Nutcracker. Balanchine himself coached her as Clara when the production was first presented at Lincoln Center in New York. She went on to dance almost every role in the production, including the Sugar Plum Fairy. She is an informed and selfless coach, empowering students and professionals as she guides them through rehearsals and performances. As a repetiteur for the George Balanchine Trust, Judy ensures PNB’s production is as authentic and enchanting as Balanchine’s original. We are so grateful to have her back in our studios.

You may notice a new character in Act II – the Green Tea Cricket. Balanchine choreographed The Nutcracker in 1954. When Clara and the Prince entered the Land of Sweets as the guests of the Sugar Plum Fairy, Balanchine sought to showcase a global array of cultures. As we look at Balanchine’s original choreography for the Chinese divertissement, we see cultural appropriation and racial stereotyping, PNB has not been comfortable with these representations and has worked with the George Balanchine Trust to revise this dance. Elements of racial stereotyping were removed prior to our 2015 premiere, with other companies sourcing PNB’s version to revise their own productions. Despite our revisions, we had to do more. Working closely with Phil Chan, co-founder of Final Bow for Yellowface, PNB now introduces the Green Tea Cricket. pet crickets are common and prized in Chinese culture and Balanchine’s choreography seems wonderfully fitting for a high-flying Cricket. We hope you will welcome the charming new character and we encourage you to read a piece by Phil Chan about the history of the Cricket in Chinese culture and in PNB’s production.

The Nutcracker has always been and will always be an entry point for many into the world of ballet. It was mine as an audience member and later as a Party Guest (Bed Roller and a few other roles came later). The care and commitment exhibited by Rehearsal Directors; student performers; and a massive team backstage, onstage, and in the orchestra pit is part of a wondrous tradition of welcoming and introducing people of all ages and all cultures to the magic of dance. We welcome you and hope you will delight in our new Cricket and our six-year-old cheese (cheddar).