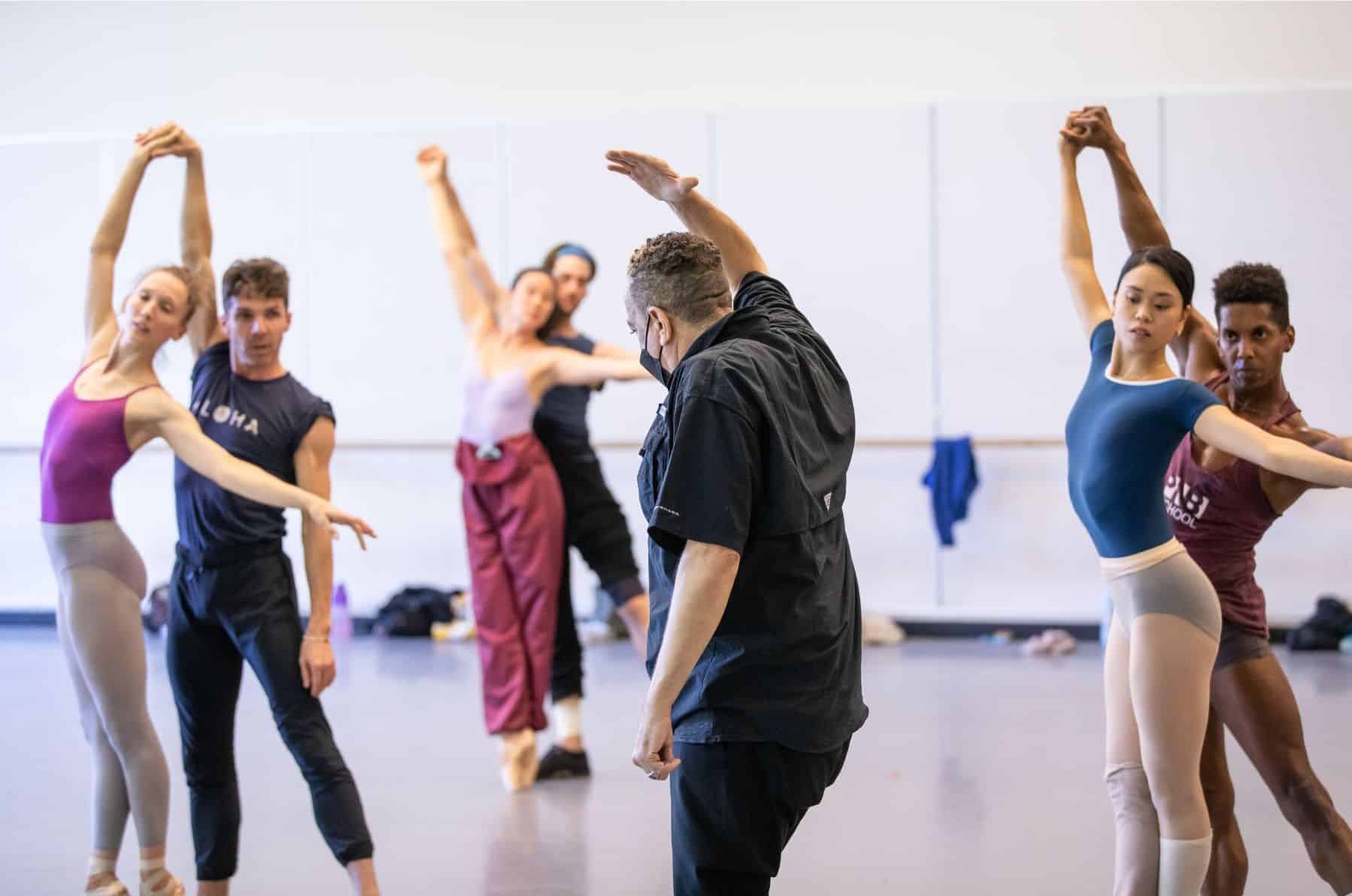 The three works presented in this program span the same lifetime as our Company. George Balanchine’s Duo Concertant, one of 34 offerings in a landmark New York City Ballet Stravinsky Festival in 1972, is 50. Crystal Pite’s The Seasons’ Canon is six, and Dwight Rhoden’s new creation Catching Feelings is either newborn or in its first 10 days of existence, depending on which show you attend. Three works spanning 50 years for our 50th Anniversary Season!

Balanchine continues to serve as a great innovator and inspiration to choreographers all over the world. He claimed to be a musician first, and then a choreographer (though he humbly explained, “I just assemble the steps”). His reverence for music, in particular the works of Igor Stravinsky, is never more evident than in the opening movement of Duo Concertant, where two dancers stand still and listen to the musical exchange between the pianist and violinist. It is not often an audience is presented with dancers who aren’t dancing. After a few minutes we see them take the stage to become a visual representation of what we are hearing. Balanchine is also quoted as saying, “See the music, hear the dance.” As the dancers begin to move like precise metronomes, his words are embodied and understood. How fortunate we were to have Kay Mazzo, part of the original cast alongside Peter Martins. Kay spent a week lending insight, sharing stories, and bringing laughter and incomparable wisdom to the studio. Duo is a gem and seeing it passed to artists and a new generation is heartwarming.

Dwight Rhoden watched Balanchine’s New York City Ballet and Alvin Ailey American Dance Theater as he developed his voice as a young choreographer. The aesthetics of these two companies exist in Dwight’s works, and in Complexions Contemporary Ballet, the company Dwight founded with Desmond Richardson. We are honored to have Dwight in our studio creating on our dancers. The results are arresting. Limbs carve through space with astonishing alacrity. Like Duo, the music propels dancers into physical manifestation of sound, featuring original and reinterpretations of J.S. Bach’s music. Credit to Dwight’s assistant Clifford Williams, who led dancers each day helping to find movement and timing with his flawless demonstration in the studio.

Crystal Pite’s monumental work, The Seasons’ Canon, created for the Paris Opera Ballet in 2016, boggles the mind. Its complexity seems outside human norms with dozens of dancers becoming one moving organism, interdependent and inseparable. Crystal was in Seattle working on Emergence when she heard Max Richter’s reimagining of Antonio Vivaldi’s revolutionary violin concerti, The Four Seasons, played live for the first time by the incomparable PNB Orchestra. She found her inspiration, and her new creation took shape. Crystal has the uncanny ability to allow us to see and experience new territory through dance. Assisted by a remarkable team including stagers Eric Beauchesne and Anna Herrmann, costume designer Nancy Bryant, scenic designer Jay Gower Taylor, and lighting designer Tom Visser – The Seasons’ Canon feels groundbreaking. We are changed by the experience, and the definition of ballet is expanded beyond our expectations.

At this moment in our history and as we watch this program, we look back 50 years, see where we are today, and witness a brilliant window into a bright future. Dance is an art form of infinite possibilities and PNB is so proud to explore them with you.