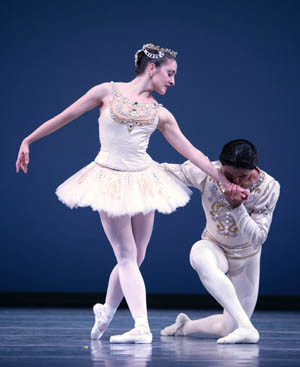 Diamonds is George Balanchine’s homage to his native St. Petersburg, Russia. The ballet pays homage to Balanchine’s youth: the grandeur of St. Petersburg, the Maryinsky Theater, and the Imperial Ballet, where Balanchine trained. Echoes of Petipa’s Swan Lake and Raymonda abound, and the centerpiece of the ballet is an intimate pas de deux, potent in its chivalrous reserve, for the ballerina and her cavalier. At its end, the entire cast joins the principal couple for a gloriously spirited polonaise.

Diamonds is the third and final ballet of Balanchine’s Jewels. At its New York City Ballet premiere in 1967, Jewels was touted as the first “plotless full-length ballet.” The story goes that Balanchine was inspired to create the ballet after a visit to the New York jeweler Claude Arpels of Van Cleef and Arpels. While each of its three ballets—Emeralds, Rubies, and Diamonds—may not follow any definitive narrative, like real gems themselves, each can be viewed in multiple ways and from a variety of angles. The great American dance critic, Arlene Croce, described Jewels as “unsurpassed as a Balanchine primer, incorporating in a single evening every important article of faith to which this choreographer subscribed and a burst of heresy, too.” Balanchine himself, in his typical noncommittal way, stated, “Of course, I have always liked jewels; after all, I am an Oriental, from Georgia in the Caucasus. I like the color of gems, the beauty of stones, and it was wonderful to see how our costume workshop, under Karinska’s direction, came so close to the quality of real stones (which were of course too heavy for the dancers to wear!).”