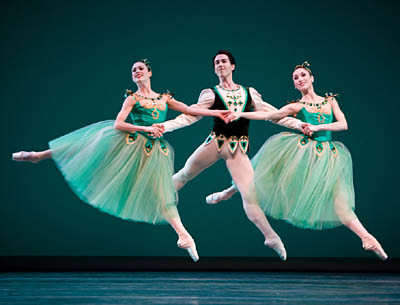 Emeralds is a romantic evocation of France. It is also Balanchine’s comment on the French school of dancing and its rich heritage. France is the birthplace of classical ballet and French is its language. With a score by Gabriel Fauré and dancers dressed in Romantic-length tutus, Emeralds can also be a window on the nostalgia inherent in much late 19th-century art, with its idealized view of the Middle Ages, chivalry, and courtly love. Balanchine considered Emeralds “an evocation of France—the France of elegance, comfort, dress and perfume.”