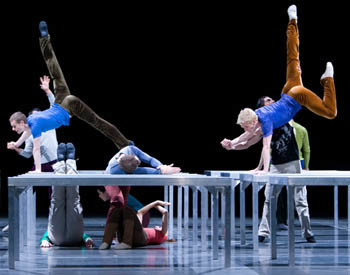 William Forsythe’s One Flat Thing, reproduced caused a stir when it premiered at Pacific Northwest Ballet in March 2008. Set to a rumbling sound construction by the choreographer’s frequent collaborator, composer Thom Willems, and performed by fourteen dancers on and around twenty metal tables, One Flat Thing thrilled many, challenged others, and, for some, called into question the definitions of “ballet” and “dance.”

Forsythe’s eclectic, intellectual starting point was a consideration of the risk and adventure of Robert Scott’s Antarctic expeditions, during which explorers relied on each other for survival, juxtaposed with his own interest in the idea of a “baroque machinery,” an ornamental, highly organized construct that runs like clockwork. The melding of these thoughts manifested itself in the collaborative development of a movement vocabulary involving high-speed choreography performed within the confines of a tightly spaced set of tables, with the requirement that the dancers play off each other, rather than a musical score, in timing their moves. The result is a thrilling sequence of team choreography, a “baroque machinery” running dangerously close to reckless abandon.