2 hours and 10 minutes (with two intermissions)

Principal support for the 2017 Pacific Northwest Ballet production of Rubies was provided by Bob Benson, with additional support from Marcella McCaffray.

Presenting support for the 2017 Pacific Northwest Ballet production of Diamonds was provided by Patty Edwards, with additional support from Chap & Eve Alvord, Lyndall Boal, and an anonymous donor.

The works of George Balanchine performed by Pacific Northwest Ballet are made possible in part by The Louise Nadeau Endowed Fund.

Jewels. The name sounds expensive and perfect for a box-office hit. But when Balanchine’s “plotless full-length ballet,” as it was touted, premiered at New York City Ballet on April 13, 1967, it had no title, only three sections called Emeralds, Rubies, and Diamonds. (Balanchine explained, “I thought of doing sapphire, too—I had Schoenberg in mind, but the color of sapphire is so hard to get across on stage.”)

The printed program offered the following note by Lincoln Kirstein:

“The idea for a new ballet using highly jeweled costumes was started in Europe over fifteen years ago when Mr. George Balanchine and Mr. Claude Arpels were introduced by violinist Nathan Milstein but it was not until early 1966, after a visit by Mr. Balanchine to Van Cleef & Arpels’ Fifth Avenue Salons, that the idea of the ballet really began to grow. So impressed was Mr. Balanchine by the beauty of the jewels he saw there, that he decided to try to capture it forever. The jewel motif in the three ballets is carried through by Mme. Karinska’s costume designs with strong emphasis on jeweled decoration.”

Balanchine himself appropriated the jewel theme twenty years before choreographing Emeralds, Rubies, and Diamonds. In Le Palais de Cristal (1947, later renamed Symphony in C), he identified a different jewel for each movement—ruby, black diamond, emerald, and pearl—and the costumes reflected their colors.

Emeralds, Rubies, and Diamonds premiered on a mixed bill that closed with Balanchine’s Prodigal Son. The matinee three days later opened with Balanchine’s one-act Swan Lake, followed by the three new ballets. Critic Clive Barnes suggested calling the collective ballets “The Jewels” (apparently this was Balanchine’s working title) in his New York Times review on April 17, which bore the headline, “Appraising Balanchine’s ‘Jewels.’” Barnes asserted, “[It] still has no title on the program, but it has to be called something,” and he used “The Jewels” as a surrogate throughout the review. In an interview two weeks after the premiere and also published in The New York Times, Balanchine wasn’t bothered by the lack of a title: “How do you name ballets anyway? I wanted to call it ‘Le Diamant,’ in French. ‘Diamond’ in English is no good. The ballet has nothing to do with jewels, the dancers are just dressed like jewels.” This sort of illusory statement was typical of Balanchine. When asked what Rubies was about, he reportedly answered, “It’s about twenty minutes.”

The quest to uncover meaning and intention in Balanchine’s works has long fascinated the dance world, and Jewels is no exception. Ideas, analyses, and commentaries abound. Sometimes these have been aided by Balanchine’s words, others times stymied, but more often their effect is simply intriguing because of his general silence. What seems clear are three things: one, Balanchine made Jewels to display the breadth and diversity of his New York City Ballet talent in its new and spacious New York State Theater; two, he created leading roles carefully tailored to his star dancers; and three, he paid tribute, consciously or otherwise, to three countries, their music, their schools of dance, and their contributions to his development as a choreographer.

Balanchine considered Emeralds “an evocation of France—the France of elegance, comfort, dress, and perfume.” The ballet is choreographed for two principal couples, a trio, and a corps de ballet of ten women. The notes in the printed program for the April 16 matinee described Balanchine’s Swan Lake as “a contemporary commentary on a classic masterpiece.” In similar fashion, Emeralds can be considered Balanchine’s comment on the French school of dancing and its rich heritage. France is the birthplace of classical ballet and also where Balanchine came into his own as a choreographer in the 1920s, working for the Ballets Russes under the direction of Serge Diaghilev. With a score by Gabriel Fauré and dancers dressed in Romantic-length tutus—ballet’s Romantic era was the mid-1800s, producing such iconic Parisian ballets as La Sylphide and Giselle—Emeralds also can be a window on the nostalgia inherent in much late 19th-century art, with its idealized view of the Middle Ages, chivalry, and courtly love.

Balanchine made two ballerina roles in Emeralds, casting Violette Verdy and Mimi Paul, contrasting personalities—the former effusive and open, the latter elusive and private—their dances creating worlds that invite audiences in as intimate observers. The choreography capitalizes on the unique characteristics of these two dancers while utilizing movement vocabulary of the French school, with its emphasis on precise footwork and a sculptural and expressive upper body. In the ballet’s first finale, for the entire ensemble, restraint, and decorum are suggested by arabesques par terre, in which the outstretched leg remains on the ground, while a more outgoing mood is captured earlier in the trio for two women and a man (he sometimes is referred to as “the Poet”). This dance, made for Suki Schorer, Sara Leland, and John Prinz, may be Balanchine’s commentary on the famous pas de trois from Paquita (1846). This was a dance Balanchine had performed as a student in Petrograd and to which he returned throughout his career, including it in the repertory of his Young Ballet and staging it at least two more times.

Emeralds was a relatively short ballet in its first outing. In 1976, Balanchine added a second pas de deux, for Verdy and her partner, and a pas de sept, a slow finale for the seven leading dancers. (He also made changes to the second ballerina’s solo; Mimi Paul has restored the original choreography for PNB.) In this second finale, the dancers form necklace patterns (also featured in Rubies, particularly its opening pose), but more so the women personify an essential element of both the Romantic era and Balanchine’s own perennial fascination—the elusive ballerina—as they are lifted gently before vanishing from the stage, leaving the men kneeling, looking into the distance, searching.

Choreographed for Patricia McBride and Edward Villella, two of the most vivacious performers in American dance history, plus a supporting female lead and a corps of twelve, Rubies effuses glam wit and jazzy chic. The ballet offers a fusion of some of Balanchine’s current interests in choreography: the partnership of McBride and Villella—they recently had been paired in Balanchine’s Tarantella (1964) and Harlequinade (1965); his ongoing response to the recent astringent music of Igor Stravinsky as well as jazz and jazz-inspired works in general; and what seems to have been a renewed interest in Broadway and film-inspired choreography, possibly motivated by his recent ballets set to jazz—a revival of Slaughter on Tenth Avenue would follow a year after Rubies, with Who Cares?, set to Gershwin songs, coming in 1970.

Rubies’ saucy leading couple plays and competes as equals, and the second, siren-like ballerina, a role made for Patricia Neary, takes on the men of the corps de ballet, requiring all four of them to partner her at once. The central pas de deux is filled with acrobatic tension and surprise. The fast and good-natured finale features some of the ballet’s most memorable dancing, especially the moment where the corps men chase the principal man like a pack of boys on the street. Rubies is the Jewels ballet most often performed on its own, particularly in the years shortly after its premiere—not only does it have the smallest cast of the three, but it’s arguably the most accessible.

Diamonds is Balanchine’s homage to his native St. Petersburg. Like Emeralds, Diamonds may be viewed as a commentary, this time on the Russian school, a combination of French elegance and Italian virtuosity. The ballet, set to four movements of Tchaikovsky’s Symphony No. 3, recalls Balanchine’s youth: the grandeur of St. Petersburg, the Maryinsky Theater, and the Imperial Ballet, where Balanchine trained. Visual echoes of Petipa’s late ballets, Swan Lake (1895) and Raymonda (1898), abound. The centerpiece is an intimate pas de deux, potent in its chivalrous reserve, for the ballerina and her cavalier. At its end, the entire cast joins the principal couple for a gloriously spirited polonaise. Diamonds was made for Suzanne Farrell, Balanchine’s leading muse, and Jacques d’Amboise. Farrell brought a remote and austere quality to Diamonds in its early years that perhaps softened over time and in the hands of subsequent interpreters. Such was her perceived independence in the role, even in the pas de deux as she was partnered by d’Amboise, that the great American dance critic Arlene Croce proclaimed Farrell “the freest woman alive.”

Jewels was made during New York City Ballet’s early years in the expansive New York State Theater, a space Balanchine was training his company to inhabit by dancing on a larger scale, with greater sweep of movement. New York’s theater-going public had caught “ballet fever” and the company boasted a diverse roster of “stars” (a term Balanchine avoided). Jewels was a showcase for those stars—“lovingly fashioned to exhibit the special qualities of the dancers,” wrote Robert Garis—and a statement of achievement for Balanchine and his company, which Garis referred to as the “Balanchine Enterprise.” Croce described Jewels as “unsurpassed as a Balanchine primer, incorporating in a single evening every important article of faith to which this choreographer subscribed and a burst of heresy, too.”

Since Balanchine’s death in 1983, Jewels has grown in popularity. Now nearly all of the world’s major companies include the entire ballet in their repertories. It offers not only the diversity of Balanchine’s creative inspiration but fills an entire program while avoiding the naiveté of many prevalent story ballets (though some might argue Jewels is not altogether devoid of this quality in its depiction of utopian societies whose members are content within its hierarchy). In observance of this year’s fiftieth anniversary, the Lincoln Center Festival presented Jewels performed jointly by Paris Opera Ballet, New York City Ballet, and the Bolshoi Ballet, each representing a country and tradition associated with the ballet.

Here at Pacific Northwest Ballet, Peter Boal has observed the milestone year by commissioning new scenic and costume designs from Parisian artist Jerome Kaplan, now a frequent collaborator with the company (Don Quixote, Roméo et Juliette, Giselle). Boal brought Jewels to PNB in 2006, and since that time he has periodically invited members of the original cast to work with the dancers on their roles. These memorable visits have included Verdy, Paul, Villella, Farrell, and d’Amboise. The timeless coaching provided by these legendary artists combined with Kaplan’s fresh designs will ensure Jewels’ place in the repertory for years to come. 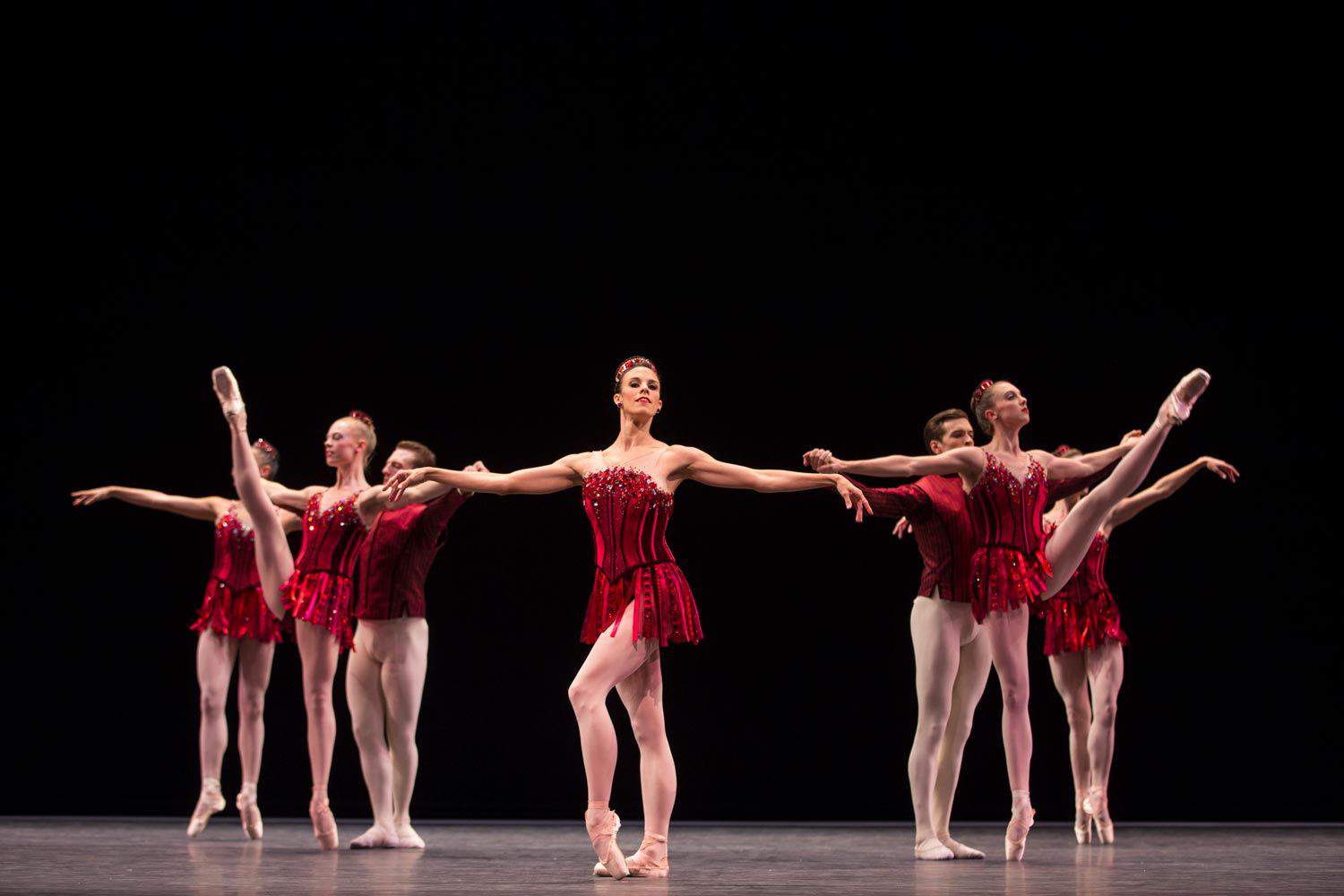 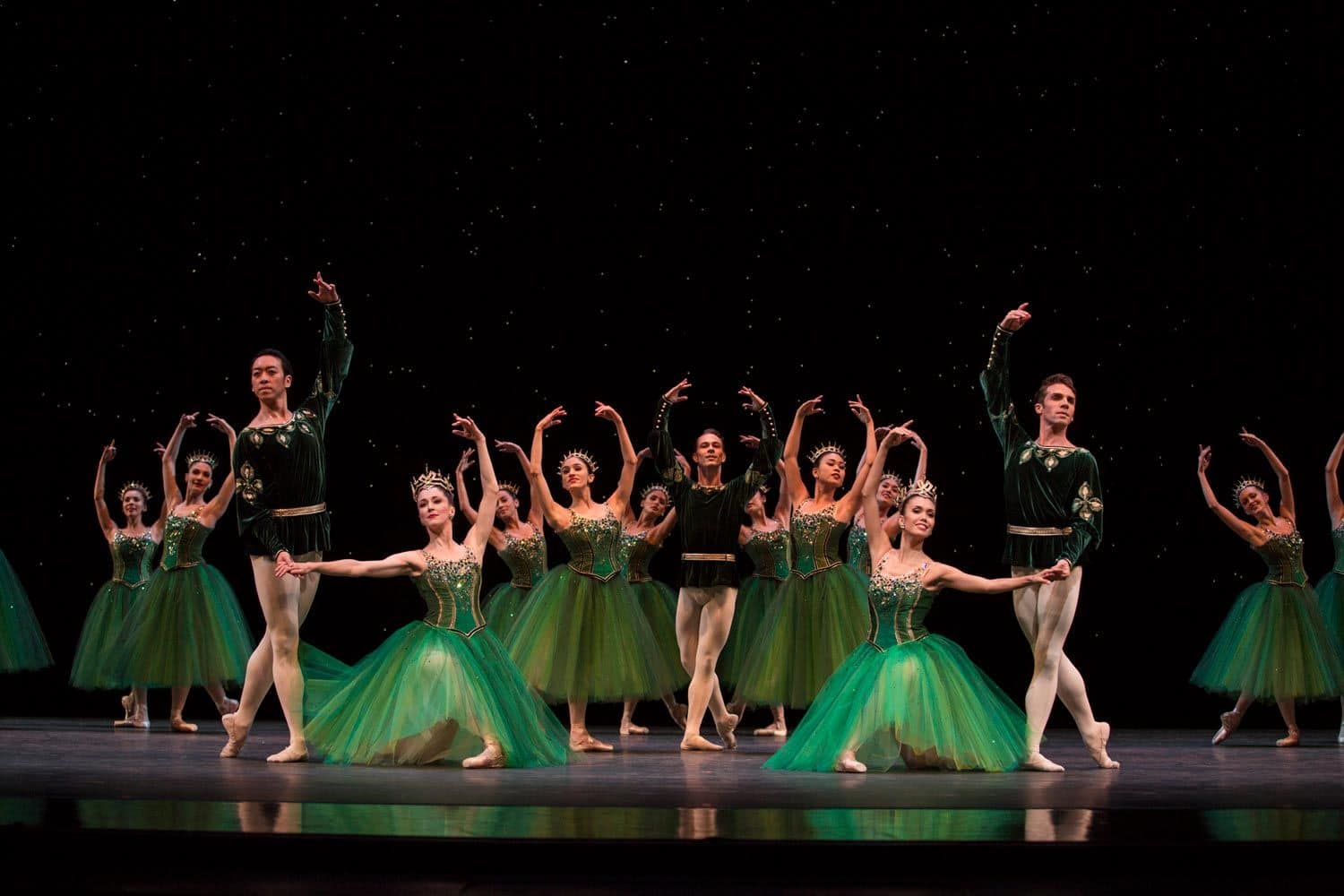 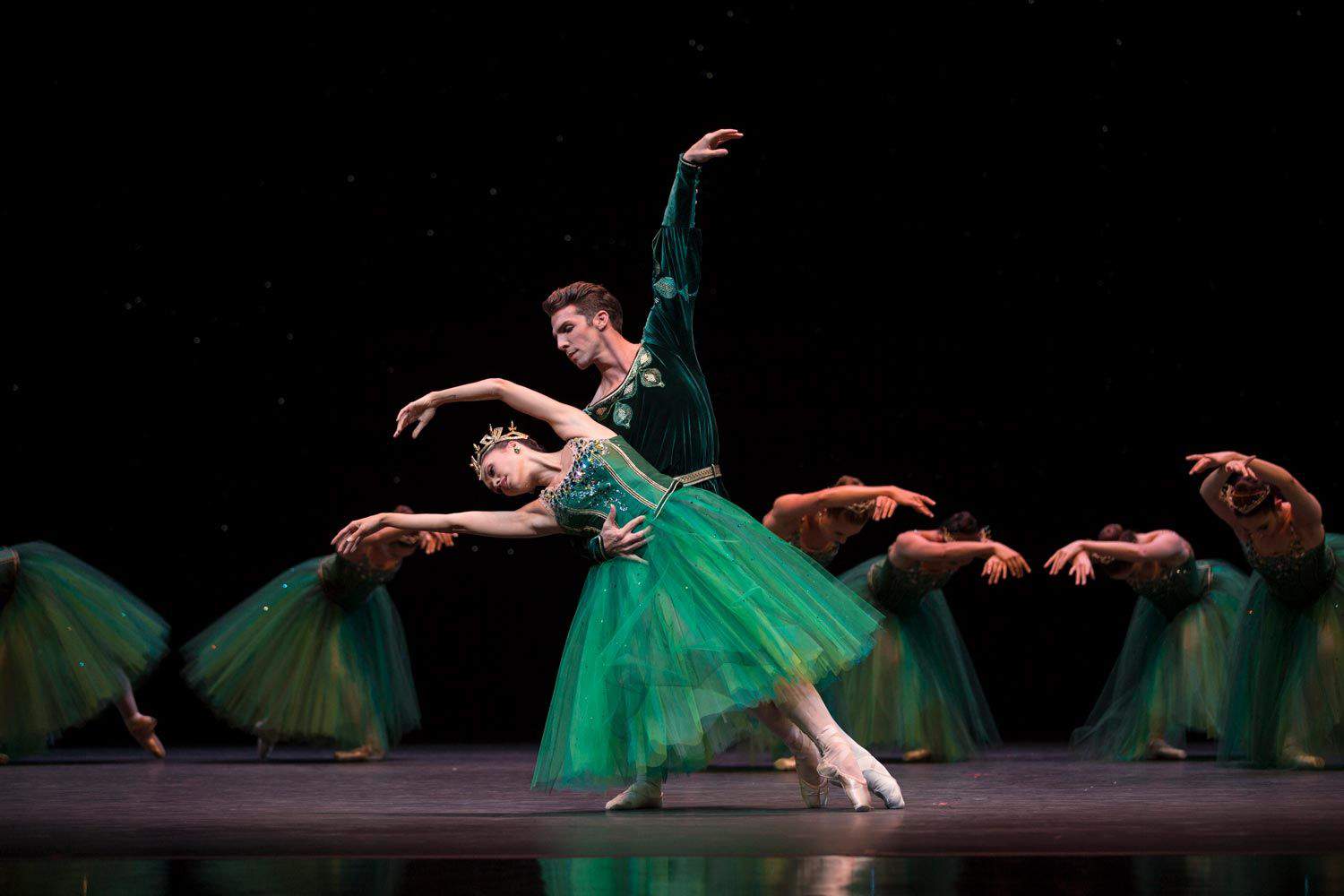 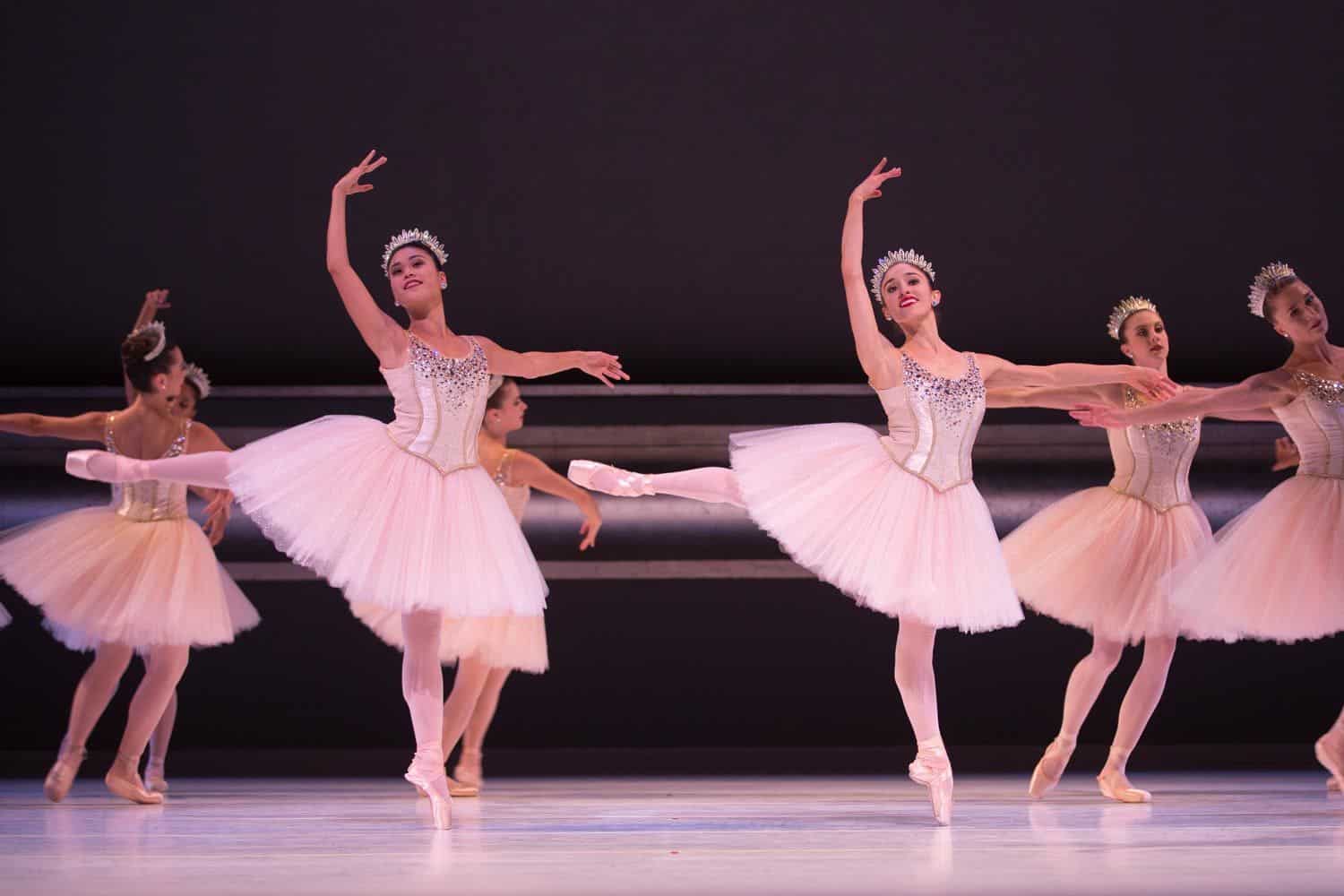 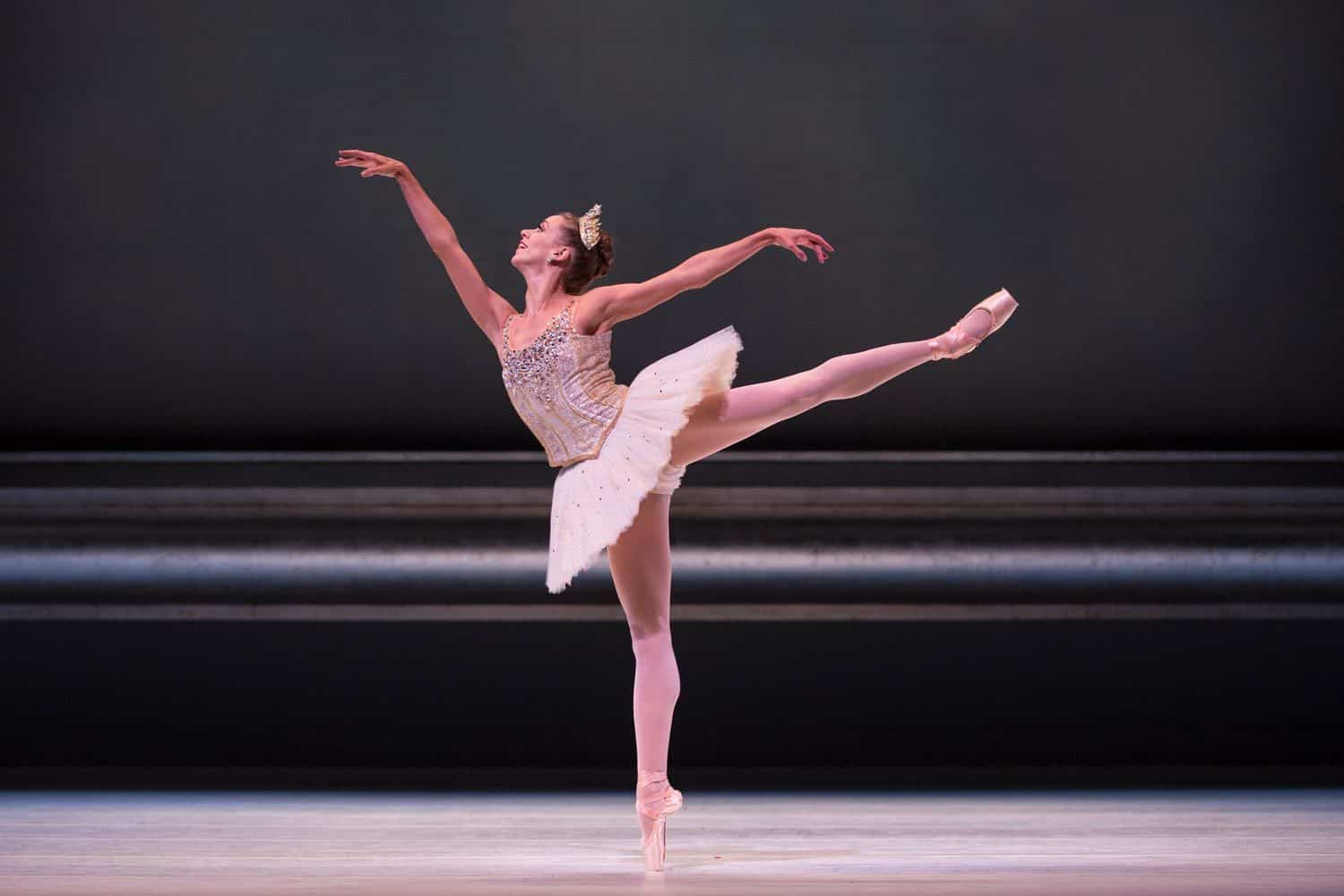 Jérôme Kaplan was born in Paris and studied scenic design at L’Ecole de la Rue Blanche.  In 1991 Mr. Kaplan met the choreographer Jean-Christophe Maillot and discovered the world of dance. He went on to design sets and costumes for numerous Les Ballets de Monte Carlo ballets including,  L’enfant et les Sortilèges, Roméo et Juliette, Cendrillon (Cinderella), Casse-Noisette Circus, Œil pour Œil (Eye for Eye), and Scheherazade. He also created the costumes for Raise the Red Lantern for the National Ballet of China in Beijing. He has also worked for Opera of Strasbourg, Shanghai Ballet, National Ballet of Finland, National Ballet of Korea, Royal Opera of Stockholm, and Northern Ballet. In 2010, Mr. Kaplan created sets and costumes for Alexei Ratmansky’s Don Quixote for Dutch National Ballet (Het Nationale Ballet) and Christopher Wheeldon’s Tornerose (Sleeping Beauty) for the Royal Danish Ballet. In 2011, he designed sets and costumes for the world premiere of Ratmansky’s Lost Illusions (Les Illusions Perdues) at the Bolshoi Theatre in Moscow, winning the 2012 Golden Mask award for Best Costume Designer, and has since designed many ballets with Ratmansky. In 2014, Mr. Kaplan designed scenery and costumes for Pacific Northwest Ballet’s production of Giselle.