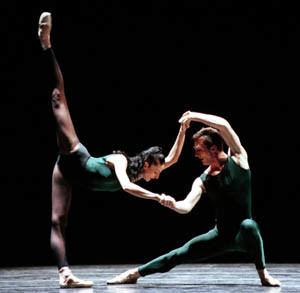 William Forsythe is an American choreographer who has spent his career primarily in Germany, where he directed Ballett Frankfurt and now the Forsythe Company. His athletic choreography is a union of classical ballet and modern dance—a bold regeneration of the academic dance vocabulary.

Commissioned by Rudolf Nureyev in 1987 for the Paris Opera Ballet, Forsythe’s In the middle, somewhat elevated was recognized immediately as a contemporary masterpiece and has since entered the repertories of major companies around the world. The faux disdain of the dancers contrasts with the strict and severe technical demands of the choreography, while the electronic score by Dutchman Thom Willems cuts the air like thunder.

Forsythe has commented: “Originally created for the Paris Opera Ballet, In the middle, somewhat elevated is a theme and variations in the strictest sense. Exploiting the vestiges of academic virtuosity that still signify “the Classical,” it extends and accelerates these traditional figures of ballet. By shifting the alignment and emphasis of essentially vertical transitions, the affected enchainements receive an unexpected force and drive that makes them appear foreign to their own origins.”

As for the title of the ballet, look for two golden cherries hanging “in the middle, somewhat elevated,” a minimal reflection of the vast interior of the Palais Garnier, home of the Paris Opera Ballet.