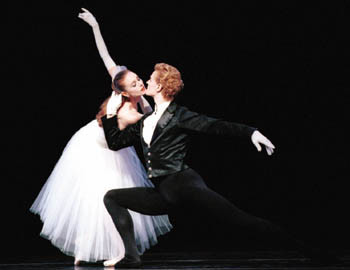 George Balanchine created La Valse in 1951 for New York City Ballet. It is set to two works that Maurice Ravel composed during the years just before and after the First World War: Valses Nobles et Sentimentales, written in 1911 as a suite of piano pieces and orchestrated the following year, and a tone poem entitled La Valse that Serge Diaghilev commissioned for the Ballets Russes in 1920. Although Diaghilev rejected the latter, calling it “a masterpiece” but “not a ballet,” Balanchine recognized its tantalizing suitability for dance, particularly when it is coupled with the earlier group of waltzes, thus making possible a more extended dramatic development.

In his fascinating personal history of New York City Ballet and its origins, Lincoln Kirstein speculated about what Diaghilev might have found “undanceable” in Ravel’s score: “The big themes shatter, rhythms dissolve, a persistent beat grows tenuous, and as a succession of feverish motifs dissolve, the climax becomes chaos. If there is any substratum of narrative, it lies in the suggestion of dancing on the edge of a volcano.” However accurate as a description of the music, this seems a somewhat puzzling explanation of Diaghilev’s prejudice, for it was precisely Ravel’s rendering of the disintegration of the waltz—and of the stable world order the dance form had come to symbolize—that Balanchine was later to respond to and make the basis of his ballet.

Replacing the waltzers of our historical imaginations—perpetually in joyous motion, buoyant, graceful, and secure—La Valse’s characters are restless modern sophisticates and naifs, who, stepping to Ravel’s shattered forms and cacophonous harmonies, pursue pleasure that is both futile and diseased. At the center of the action, the white-gowned heroine seeks her ideal partner, only to discover that it is Death to whom she is irresistibly drawn. And when, just before the curtain falls, the disoriented party-goers finally reconstitute themselves as a swirling mass, it is clear, to the viewer, at least, that what they have joined is a dance of death. These are waltzes, as conductor Erich Kleiber long ago pointed out with reference to Ravel’s music, that are “poisoned with absinthe.”

La Valse, with its dramatic suggestiveness and atmosphere of decadent romanticism, struck some viewers as a surprising departure for Balanchine. But, in fact, as dance writer Claudia Roth Pierpont reminds us, throughout his entire career “the romantic and dramatic…existed side by side with Balanchine’s more renowned abstract classicism.” As for the choreographer’s attitude towards Ravel’s music: he had always loved it; he choreographed at least nine ballets to it; and, judging that, after Stravinsky, it was Ravel who had given the Western world the most considerable body of contemporary music suitable for theater, in 1975 he staged a festival at Lincoln Center devoted exclusively to the composer’s work.